What Can You See?

Following the logic that the early maps indicate that there was some pretty feverish activity at the top of Yalimbah Creek, let’s look there!

These days, the luxury of Google Earth pictures lets us look down on the scene without leaving our personal computer. Immediately one site draws our attention. A large red(?) circular space at the point where the tidal flow of Yalimbah Creek ends!

This is a mysterious site. Why is it red? What is it? Does it have any connection to No.1 Farm?

The only answer was to go and look!

The owners of the property were intrigued by the mystery too when we talked about the site. They had seen things there, but couldn’t explain them.

They were happy for us to look and they joined us.

Here is the red circle from ground level: 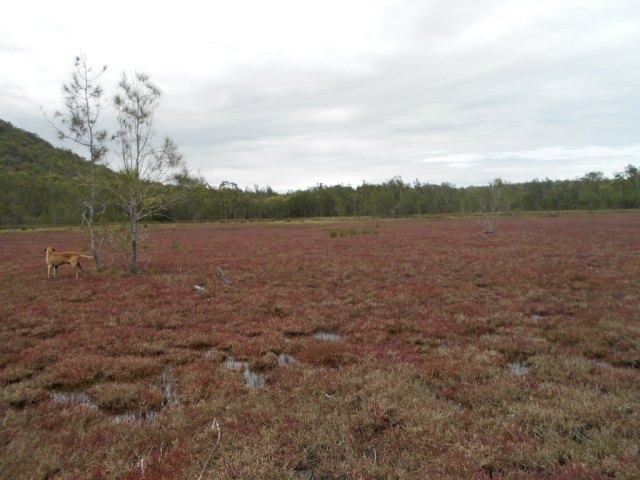 (Murray the mastiff joined us) The area seems to have been cleared. The red colour is from a plant growing in the salt water. The area is about 200 metres in diameter. It has some shallow holes dug into it (see below) and our metal detector found some underground narrow, straight lines that could be drainage gutters.

As mentioned, the whole area was surrounded by dense undergrowth, but as we reached the edge of the clearing we found a clear pathway or rather, roadway, because it was about 3 metres wide. 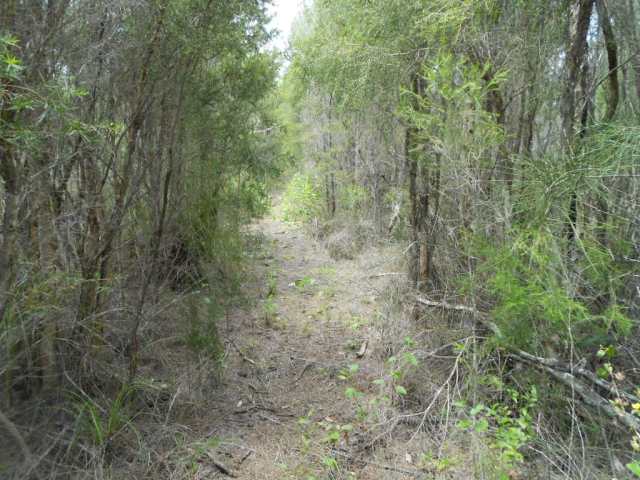 This path shows no sign of recent use. It is a straight line that can be seen on Google Earth. It is raised maybe a metre above its surrounds and on either side there are quite deep channels draining the tidal and rain water away. We haven’t dug into the path to see if there is a rock base underneath as in the Old AACo Road, corduroy section, but apart from the obvious non-use and the undergrowth it seems similar.

Go back to the Google Earth picture … this photograph is showing the path between the two markers. It continues in a straight line until it reaches a small constructed harbour or basin dug out from the side of Yalimbah Creek.

Here are some more views of this pathway: 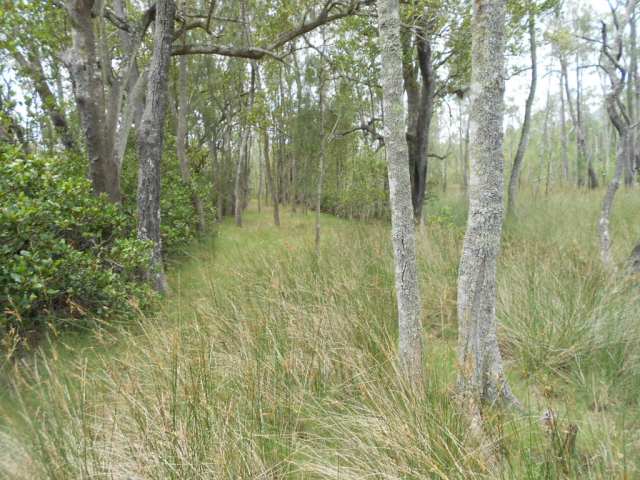 This last photograph gives a sense of the site. The straight lines and the sense of solidity of the construction work give the site an eerie feeling. At this point of the road, it is approaching the small basin or harbour.

Here, on the banks of Yalimbah Creek is surface evidence of the rockwork that appears to be below the surface and that is suppressing the growth of plants on the roadway. This rock must have been carried to the site and it has been broken into roughly uniform sizes. It is similar in form to that found further down the creek on the Old AACo Road.

At various points along the road are what appear to be the remains of rudimentary bridges.

The water here is salt water from the daily tidal inundation. This photograph was taken at about halfway down the run out tide.

These photographs give some sense of the excavations that form the small basin. There are the remains of a bridge and perhaps a jetty, suggesting that perhaps stone was transported up the river to this site from the quarries downstream. 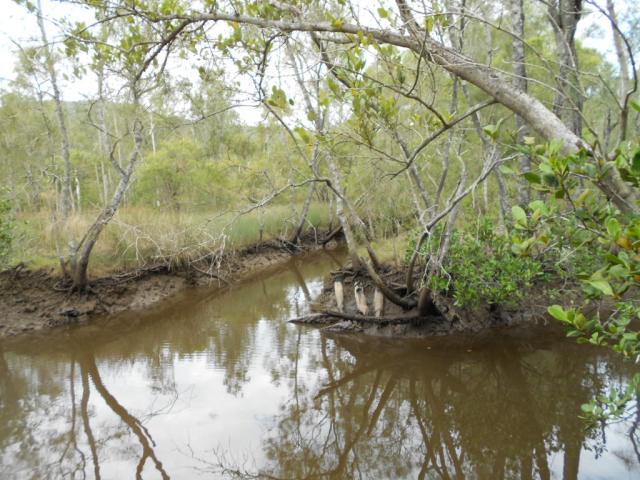 The channel shown in this photograph runs beside the road that extends on the other side of the basin and drains part of the area. The whole of the site within 200 metres or so appears to have been drained.

At the basin, the road which travels in a straight line from roughly the north east turns roughly south and continues in a straight line. We have yet to trace the road to its conclusion in either direction, but it is headed in its southerly arm towards The Old AACo Road.

Where the road turns south, it becomes very clear on the Google Earth picture below: 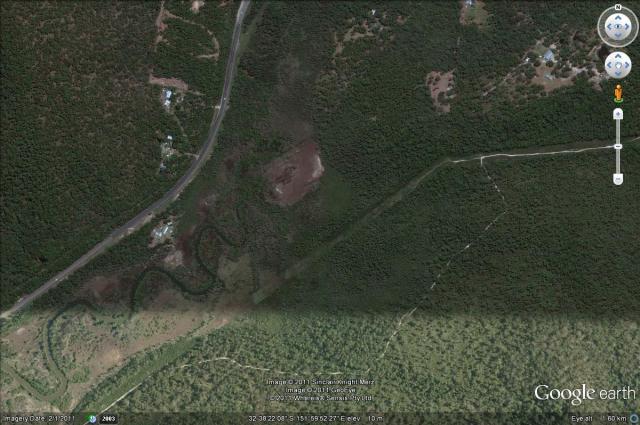 As is mentioned, clearing beneath the powerlines shown has removed a section of the road.

Later in this story, we’ll look at what the documents say about what happened at No.1 Farm between 1826 and 1830. Suffice to say here that a considerable amount of convict labour was spent on No.1 Farm. Walking around the Yalimbah Creek precinct allows the visitor to get some idea of the massive amount of human labour that was required to dig channels and harbours, to break and carry rock and to build bridges in an environment that was continually filling and emptying with water to the rhythm of the tides.

There would have been short time periods when the convicts could have removed mud before the space they dug was full of salt water again. Hundreds of metres of road have been constructed in the most horrendous circumstances.

Any visitor to the site today will also gain some concept of the insect and snake life that must have added to their fears and pain.

In addition, the convicts had to walk some 5 kilometres or more just to get to the site to begin work and then walk the same distance home at the end of their day.

It is now 186 years since work began on the ill-fated No.1 Farm. What an amazing set of circumstances that so much still remains!

This is the blog for The Old AACompany Road from Karuah to Tahlee. It contains information about walks on the road, history and other information.
View all posts by aacoroad →
This entry was posted in Research. Bookmark the permalink.