The Truth About No.1 Farm!

The Story So Far……

Well you should know a fair bit about The Old AACo Road from Karuah to Tahlee(et v.v.) by now.  However, if you’ve looked at The First Walk Booklet back in 2010, you’ll see that back then, we didn’t know where No.1 Farm really was. Now we do.

And the really exciting thing is that it still exists after 180 years.

Here are three stories that’ll tell you how we found it.

Because of the considerable amount of documentary evidence left by the company, The Australian Agricultural Company has been the subject of much academic research.

The early history of the Company was also fairly controversial and it was populated with larger than life characters engaged in momentous events. The couple of decades immediately following the foundation of The AA Company in 1823 were decades of immense change for New South Wales and in particular for the areas chosen by The AA Company to be the target areas for development including Port Stephens and the Karuah River Valley.

However, the archaeological studies of the impacts of The AA Company have not matched the academic studies.

This short story does not claim to be an attempt at archaeology, but it does pursue history on the ground to match the documentary research.

Indigenous history in Australia is continually facing the fact that physical history disappears at a rapid rate. Significant sites such as trees with bark removed for the building of canoes or the making of shields have very limited lives. Traditional sites for spiritual and cultural activities can become difficult to recognise within a few decades and after hundreds of years one can’t expect much to remain of these areas. In European eyes, buildings and monuments form much more explicit proof of existence and the battle for recognition by Aboriginal people for the things and places they hold dear can be very grim indeed.

So it is with No.1 Farm. The site of No.1 Farm didn’t ever contain buildings of any significance. It consisted mainly of roads and canals and ditches and rock walls. It was built by convicts who laboured intensely for just a few years and as soon as it was finished, it was deserted. Who could expect to find that any of it would remain. Indeed, the prospect that any remnants would still be there have been so remote that no one has gone looking.

The First Clues … The Maps

No.1 Farm shows up on a number of maps produced in the 1820s and 30s. Given that Robert Dawson, the first Chief Agent of The Australian Agricultural Company first set his mainly assigned convict labourers to work on the farm in 1826 and his successor Sir Edward Parry closed it down in 1831, this is to be expected. So any relevant maps can be expected to be from this narrow time window from 1826 to 1831. 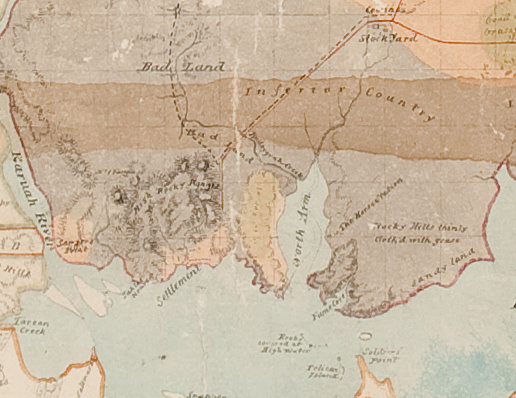 (No.1 Farm can be seen just to the north west of “High Rocky Range”)

This 1828 map was being presented to the Court of Directors in London and was to be used by them to negotiate for better land than they had tentatively been granted.

These places are clearly delineated: The Karuah River, Sawyers Point(later Karuah), Tahlee House and The Settlement (at Carrington).

Between Sawyers Point and Tahlee is a cove – No.1 Cove and a creek flowing into it Yalimbah (or No.1) Creek. At the very top of that creek is the indistinctly labelled No.1 Farm. This is one of the first references that places the farm at the head of Yalimbah Creek. Another geographical marker for the farm is its relationship to what is labelled on the map as a High Rocky Range.

An 1826 map (First Settlement Port Stephens, New South Wales 1826) labels Yalimbah Creek as Yalinbah Creek, but even today, the name No.1 Creek is applied by locals almost without exception in spite of the fact that the name Yalimbah Creek is shown on most maps of the area. However, all maps show the cove into which the creek flows as No.1 Cove.

This map has been the cause of some confusion among scholars. At first glance, it clearly shows No.1 Farm and with it, the end of Yalimbah Creek. The farm’s position in relation to Yalimbah Creek is accurate, but the track leading to it is not.

Lest this work be attributed to the fastidious John Armstrong, Company Surveyor, a pencil note shown above from the top right hand corner explains that this is a: “Facsimile of Armstrong’s Sketch Port Stephens Settlement 1830”.

Elsewhere on this map, a mirror image of a pencilled note from the other side of the paper informs us that this is “Sketch of … path from the Settlement”. This is further evidence that this document was not meant to be regarded as an official map.

That it is hastily and inaccurately sketched is supported by the misplacement of the range of hills shown as running roughly north north west of Tahlee House. In fact these hills would lie directly across the path shown as leading to No.1 Farm. The conclusion is that the path to No.1 Farm should be shown as being much further north and circling around these hills.

In spite of other inaccuracies, the positioning of No.1 Farm at the head of Yalimbah Creek does support other clues as to the likely whereabouts of the remains of No.1 Farm.

(No.1 Farm in tiny print at the head of Yalimbah Creek)

This map looks unpromising at first glance, but once again, No.1 Farm can be seen in position at the very head of Yalimbah Creek and in the same relationship to the “High Rocky Range” shown in Map 1.

THE MAPS, A SUMMARY …

So, if we were to go looking for whatever remains of No.1 Farm, we ought to be looking at the point where Yalimbah Creek begins.

This is the blog for The Old AACompany Road from Karuah to Tahlee. It contains information about walks on the road, history and other information.
View all posts by aacoroad →
This entry was posted in Research. Bookmark the permalink.