Posted in The Road from Karuah to Tahlee | Leave a comment

Posted on October 10, 2011 by aacoroad
Posted in Uncategorized | Leave a comment

This year’s walk will be on Sunday 20th November 2011. We’ll gather at Longworth Park, Karuah for a sausage sandwich while we register, then we’ll head off in groups under the direction of our guides. When you register, you’ll get tickets for the walk, the creek crossing, the devonshire tea at Tahlee and the bus ride home. Cost is $20.

You can book by contacting Dave at alcedo2@bigpond.com or phoning 0249975409. This year you can pay on line …. details by email or you can get more info by logging on to karuah.net and following the prompts.

We reckon we’ll get to Tahlee around 2.00pm

Here are some pictures that give a bit of perspective on the corduroy section of the road. The Google Earth view shows the corduroy section crossing the salt marsh to the site of the old Yalimbah Creek Bridge. It would be great to get an accurate date on the logs that make up the road here just to see how old they are.

Whilst remains of corduroy roads in Australia have been found, they are almost exclusively 20th Century in origin. If archaeological research indicates that this corduroy road is of 19th Century origin, it would be of great importance. It is certainly possible that given the twice daily dunking in salt water and the nature of the soils that form the salt marsh in which the road sits, the road dates back to the 1830s.

The following articles give some insight into corduroy roads:

A SECTION of road dating back to the early 1920s has been uncovered by workmen on the Mardi to Mangrove Creek dam water pipeline.

Known as a ‘corduroy road’, it’s made of sections of hard wood that were laid in boggy or swampy patches of roadway from as far back as 4000 BC to as recently as the mid 1900s.

While the Central Coast had many corduroy roads, especially in the swampy areas of the valleys, finding a large intact section in such good condition is rare.

The section of road was discovered late last week when pipeline crews were excavating near Kidman’s Lane off Yarramalong Rd. Work stopped immediately as required by the project’s approval until the find could be properly assessed.

Archaeologist Andy Roberts, of Umwelt Australia, and two workers from the Conacher Environmental Group excavated the section and took photographs and other measurements for archival records.

Long time residents said they remembered driving over the old section of road which ran parallel to Yarramalong Rd.

Construction on the pipeline is continuing with about 8km of the 21km pipeline now in the ground and steady progress on associated works at Mardi Dam, Wyong River and the fishway at Lower Wyong Weir.

Excavation of a corduroy road from the 16th Century in Oranienburg

A corduroy road or log road is a type of road made by placing sand-covered logs perpendicular to the direction of the road over a low or swampy area.  The result is an improvement over impassable mud or dirt roads, yet is a bumpy ride in the best of conditions and a hazard to horses due to loose logs that can roll and shift.  This type of road was already constructed in Roman times.  It is known to have been used as early as 4000 BC with examples found in Glastonbury, England.[1] Compare the puncheon or plank road, which uses hewn boards instead of logs, resulting in a smoother and safer surface.

Roads can also be built as a foundation for other surfacing. If the logs are buried in wet, acidic, anaerobic soils such as peat or muskeg they decay very slowly. A few corduroy road foundations that date back to the early 20th century still exist in the United States

Robert Dawson, the first Chief Agent of The Australian Agricultural Company was a man of great vision and perception. His wonderful treatise The Present State of Australia; a description of the country, its adavantages and prospects with reference to emigration: and a particular account of the manners, customs and condition of its aboriginal inhabitants contains his description of the first recorded journey by a European along the route of The Old AAco Road. This description is of a journey beside the Karuah River at a time when the first contacts between aboriginal people and AA Company were being made. Robert Dawson is at times patronising and superior to the aboriginal people with whom he made contact, but his respect and affection for many of them is clear as his understanding of their mastery of their environment.

………… we returned to Soldier’s Point, recalled the schooner on the following morning, and sent her again up the river (Karuah), where we appointed to meet her on a certain day. The next duty was to convey our horses across the harbour  to the shore immediately opposite (around North Arm Cove area) which we did with considerable difficulty, by the assistance of the government launch, and we then formed an encampment on that side, from which our whole party departed the next day to join the schooner at the head of the navigable river.

During this journey we passed over about twenty miles of country, some parts of which were of a very inferior description, and others of better quality. The forest every where open and grassy, and free from brushwood; but generally thickly timbered with tall trees, both in the vallies and on the tops of the highest hills.

The natives, Tony and Ben, accompanied us, and also two other natives: the first had his gin, (wife) who carried her little boy, about twelve months old, astride on her shoulders, while the little black urchin fastened his fingers in her hair to prevent himself from falling. They were all three as naked as when they were born, and appeared to suffer no inconvenience from the want of covering – such is the luxurious nature of the climate.

On our journey we fell in with a wild, fierce-looking man, about the middle age, with two slender, interesting looking youths, named Wandoman and Booramee, apparently about twelve years of age. The old man was armed with a long spear; his beard was short and bushy like his hair and his body naked; while he had placed in his girdle of twisted opposssum fur, which he wore around his loins, an iron tomahawk and a large piece of half roasted kangaroo flesh. The trio were wandering in search of the rest of their tribe, who had moved to the beach; and as Tony belonged to the same tribe, I requested him to invite the strangers to join us. This was done in their own language, they being unable to speak a single word of English. The invitation was immediately accepted, and we proceeded together on our journey. I was much pleased to find that every considerable brook and hill had a name; and as the old man was conversant with them all, I made memoranda of their names, shapes and positions, to assist my recollection if I should hereafter examine the country more minutely, or be at any time lost in that quarter of the forest when alone.

After two days’ journey we arrived at the station where we had left the party and found the schooner waiting for us.  Pages 15 & 16

This simple pen and ink sketch – artist unknown still captures something of the sense of Tahlee today. 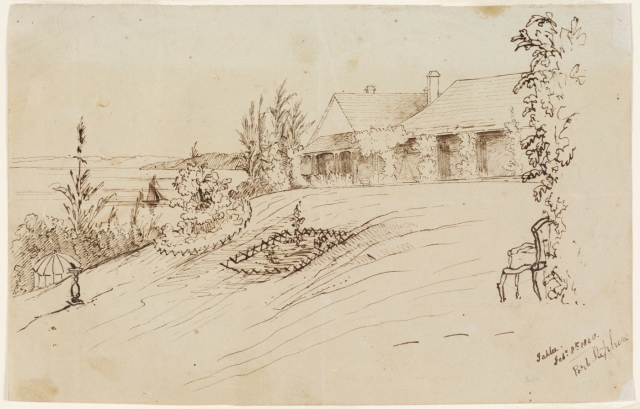 The 1845 Map by Phillip Parker King

The modern map of Karuah/Tahlee

The Phillip Parker King Map of 1845

One of the great insights into the Old AACo Road from Karuah to Tahlee is provided by Phillip Parker King’s lovely map of Port Stephens. It shows the old road in detail as well as the foreshore, Karuah River, Yalimbah Creek and lots of other detail.

Phillip Parker King was a renowned hydrographer and map maker, having gathered a great deal of experience as a ship’s captain. His maps of the coast of Australia are of very high quality. His most famous voyage was probably when he captained the Adventurer, the ship that accompanied the Beagle on Charles Darwin’s famous voyage.

So, when P. P. King was appointed head of the Australian Agricultural Company, it was hardly surprising that some of his old shipmates should visit Tahlee at his invitation. Charles Darwin and his artist colleague Conrad Martens were both visitors at Tahlee. (One of Marten’s paintings of Tahlee sold at  Christie’s Auction House recently for thirty five thousand pounds!)

This 1845 map reveals the fact that the orginal AACo Road crossed Yalimbah Creek (a bridge was there in 1845) and then wound its way around the back of the hill on the Tahlee side. Nowadays, it takes a short cut beside the creek courtesy some extensive stone work. The rest of the road though, follows the same route that it does today.